Hi again folks; long time no see! Don't worry, neither I or the project are dead. In fact, I got myself a new computer, and SuperTuxKart marches on towards alpha 2. But as I guess you aren't here to read endless intros (and this post is a big one), I'll just get on with the good stuff. ;)

SuperTuxKart has passed the 5000th commit mark, and quite a lot of the ones after have been bugfixes. Auria joked that they broke everything and then fixed it again, and that's essentially much of what's been going on. This proves that refactoring and rewriting code is absolutely not trivial, so while we non-programmers might think 0.7 should have been out already, that is not reasonable with only 2 main programmers, which are already devoting quite a lot of their spare time to this project. You may see what I'm getting at: the STK team would like to have more members. Please have a look at this page on the STK wiki and see if you can help out with anything; we'd be happy to get you on board! :)

But there's more news than just bugfixes! Take a look at the new "makeup"! 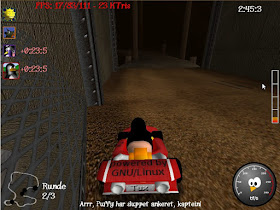 Gloomy, isn't it? Tracks can now have skyboxes and fog with the appropriate color for each one.
Also, you have one example of some new in-game messages which indicates when a weapon has been used successfully. It's particularly useful for the new swapper weapon, so you don't miss out if you don't have sound effects enabled. 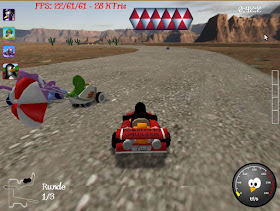 Well, the title says it all really, except for the maker's nick: MiniBjorn. Thanks! 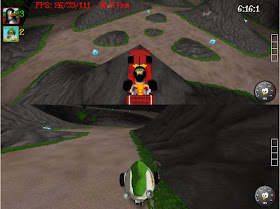 This screenshot is shown for four reasons. First of all, it shows that 3 Strikes Battle is added back in. Second reason is that karts now have power on all four wheels, so-called 4WD, as opposed to before when only the back wheels mattered. Besides allowing me to climb extreme heights, it helps stabilizing the kart with the physics, hopefully making the physics less troublesome in certain circumstances.
Third reason is that the cave has been retouched by MiniBjorn, adding some plants and shadows using a texture over the vertex.
Last reason is for telling that anisotropic and trilinear filtering have been added to STK. These are techniques to make textures look better at different angles, if I understood Wikipedia right. I don't know whether it matters in this screenshot or not, and I'm too lazy to disable it, drive up there again and take another one just for comparison. Go to Wikipedia if you're interested in that. :P

Talking about physics, it's been tweaked a bit to make driving (and jumping) better. The suspension has been hardened, so it should no longer feel like you are rocking around on a boat. Furthermore, flying in mid-air is better now as well; I won't go into detail as you aren't doing that much with the current tracks.

The coordinate system has been changed so y=up and z=forwards, and without getting technical about it, it means some tracks have to be re-exported. Hiker said the track exporter will most probably not change that dramatically again, so people wanting to export tracks should be good to go now. But make sure you are using the latest track exporter, and not the one shipped with STK 0.7 alpha 1 - it's terribly outdated. Having said that, you should keep an eye on this page if you're interested in helping out, and update it if you start to port/improve a track.

Last thing I'm going to mention (not that there hasn't been more changes, but if all details were covered the post would probably be a mile long) is the adding of a guest account, which will make occasional multiplaying a bit easier since you don't have to add a new player when you just want a quick race against a friend coming for a visit. Furthermore, the most used profile should be picked automatically when you are choosing a kart, so you don't have to be that careful getting the wrong profile.

Hopefully SuperTuxKart 0.7 alpha 2 will be just around the corner - until then, take care and play some STK if you get the time.
Arthur at 11:01 PM 6 comments:
‹
›
Home
View web version