In a bit of a rush, we finally managed to get a third alpha release of the upcoming 0.7 release out. You can download binary packages for Windows and Mac from the usual location at http://sourceforge.net/projects/supertuxkart/files/

f you are compiling stk yourself note that it is recommended to use the current "1.7 stable" irrlicht branch, see http://irrlicht.svn.sourceforge.net/viewvc/irrlicht/branches/releases/1.7 (which will become the next 1.7.2 release). While STK mostly still works with irrlicht 1.7.1, bugs in this irrlicht version can result in some texts not being displayed, and even in crashes (mostly in menus though).

This version shows very much work in progress, but we are getting closer to a release candidate. Hopefully this will motivate some artists to help us port/create a few more tracks, while we are busy fixing bugs and tuning some settings.

Particularly, behold the new track I (Auria) have been working on lately : the farm track 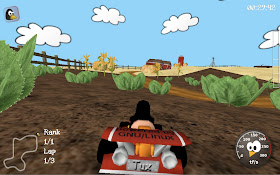 Known bugs or issues are:

We are looking forward to feedback, bug reports (please check with our bug tracker at http://sourceforge.net/tracker/?group_id=202302&atid=981038 first), suggestions (though we are pretty much feature frozen for 0.7), and some contributions :)

Well, better write before the backlog becomes too big; things have been moving fast lately. :D
First off is the new race results screen, which should be easier to follow and additionally has a nice animation when playing Grand Prix. First, it shows the usual race time table, just as after a quick race. But afterwards it switches to a new table where it shows how many GP points you have, plus how many points you just earned, and increases the GP points accordingly. Then it moves all GP participants to their new positions. And if you don't want to wait for the animations, you can press the fire key to continue. Apart from me forgetting to sync to VBlank, and some erroneus points, everything looks great. 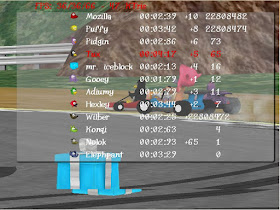 Crescent Crossing, Skyline and The Island has been converted, but except for The Island they are without collectibles for now. Thanks to sj04736 for The Island conversion. :)
Also, some music has been removed, and some has been added/updated. I'm not going through that now, since things may change more later, but as for the updated song, Krobonil should get our thanks for his update on the music for 'Snow Mountain'.
EvilTux was simply too evil to include in STK, so in order to get a more child friendly game, he was thrown out, beak first. Only kidding! The real reason was that we got a better replacement, so while EvilTux himself was thrown out, another driver got his kart. Meet Konqi, the cheerful KDE dragon. :) 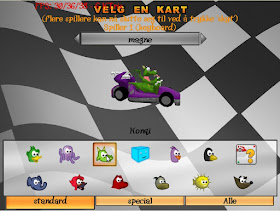 Yet another gameplay detail has been added recently, namely slipstreaming. When a kart drives behind another one for a while, and then moves out of the slipstream, it recieves a speed boost and can then overtake the kart in front.
Furthermore, we've got a new code contributor, jmimu, who made the kart rank icons on the left show attachments, and animate when a kart overtakes another, or when it explodes. Rank is also added as text, in case you use more karts and there isn't enough space to show all kart icons. Also, the human player icons got a nice rounded outline, similar to what the 0.6 branch had. But this one is animated! 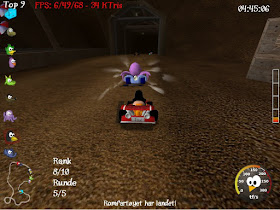 Clipping of text, especially for some languages which might have used more space than the English counterpart, used to be an issue in the 'Help' screens. Well, no more! Take a look at this: 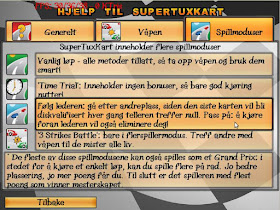 Essentially, the widget resizes when being in focus, while the rest of the widgets gets hidden under it. That's splendid when space is too small, and translators need the extra line in order to translate the widget text in a good way. As you probably have noticed by now, I'm using another theme instead of the default 'Glass' theme; this one is both lighter and easier on the eye, and I happen to like yellow/'Peach'. ;)
And, lots of bug fixes and general niceness increase has happened as well. One of the minor nice things I'd like to mention, is that STK now shows a loading screen as fast as possible when starting the game, before loading the rest of the game. So now you won't get angsty because the GUI doesn't show up in the first few seconds.
Well, that's about it for this time, if I haven't forgotten anything important. Remember: you too can get involved in the game and in the community. :)
Arthur at 6:36 PM 6 comments:
‹
›
Home
View web version