It has been around 2 months since we did our alpha release of the online racing implementation in SuperTuxKart. First of all a big "Thank You" to all the people who went through the effort of downloading and compiling SuperTuxKart themselves. They have provided very valuable testing and feedback for us, and as a result we have reworked some of the code to make it more user-friendly, and removed some bugs. I am also quite proud of our testing team: essentially no significant bugs in the actual online racing was found during the alpha - so a great job by all of our testers and coders! There was a tireless effort especially by Benau, Deve, and Alayan to constantly improve our code!

Also a big thanks to players who have volunteered their hardware to provide more servers for us. Even during the alpha we had typically more servers than actual players. Hopefully this beta release will allow more people to participate in online races. 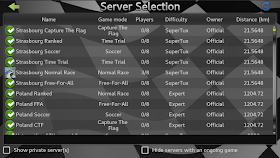 We are now confident that our code is stable enough for a beta release: 0.10-beta1. This means that we will provide our usual set of binaries and installers for all supported platforms. And hopefully that means that many more people will be able to test this current version. Note that we consider this beta very stable, de-facto very close to a release candidate. But we are waiting for another track to be ready to be included, so we are using this time to give more players the opportunity to test (or re-test) our online racing implementation.

If you haven't read the previous alpha announcement, here a short summary of the new features in SuperTuxKart compared with the latest stable release 0.9.3: 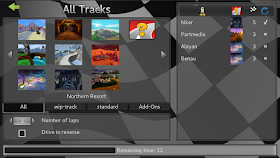 One important caveat: the network implementation is actually quite sophisticated (I might do a separate blog post about its implementation), but there are still limits in what we can do about the latency (or ping) between clients and servers. We strongly recommend to find a server with a ping of under 150ms for a smooth playing experience. The ping to the server will be shown when you connect to it. You can of course try servers with higher latency - while it should still work, you might notice more often that karts stutter, drive like drunk (though that might of course also be the skill of the other players) or are 'teleported' around. In addition you need a stable connection, so if you experience significant packet loss or jitter you will see the same strange behavior. 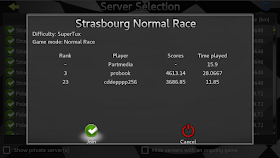 And new in this beta compared with our alpha (besides bug fixes and GUI improvements) is the possibility to now join a server while a race is in progress: you will become a spectator and can follow the race-in-progress. You will be joining the actual racing fun when the next race starts.


We have now pretty much declared a feature freeze to prepare for our release candidate, once we get the new track added. One noticeable difference to one of our release candidates is that we did not update all translations: this usually delays a release by two weeks, and we would like more testing to be done earlier. On the other hand, we hope that there won't be too many changes between the beta and the release candidate, and that we will soon be able to get onto the official release of online SuperTuxKart. 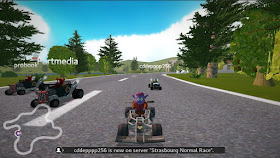 You can download the beta from SourceForge. Feedback as always is welcome, ideally on our forum, which is also the best location for support requests. Bug reports can be submitted to our tracker on Github. Note that bug reports and support requests here as a comment are not ideal, and might easily get missed, so please use the appropriate URL above.

We hope you are all going to enjoy SuperTuxKart with online races!
Hiker at 3:00 AM 12 comments:
‹
›
Home
View web version