Bringing balance to the karts

The upcoming release of the next SuperTuxKart version is getting very close!

Several hundred players tested online networking with thousands and thousands of races. While it was already very playable, the beta helped to catch a few nasty bugs which are now fixed for the release, and to get gameplay feedback, as online races have a different balance compared to races with AIs.

But in this blog post, our main focus will be gameplay, with all the changes applying to both single player and multiplayer compared to 0.9.3. The basis of STK's gameplay remains unchanged: drive along the tracks while trying to drift and collect nitro, using items to boost yourself or attack other karts, but the next version includes many evolutionary improvements to enhance fun and balance.

First of the main changes: the kart classes have been rebalanced. People familiar with the previous versions may have noticed that heavyweight karts were useless, as they were equal or inferior to medium karts in everything. Lightweights were superior for abusing unintended shortcuts but otherwise worse.

Now, each kart class has different acceleration, top speed, nitro consumption, maneuverability... values which have been carefully tuned so that each kart class is best in some tracks and race conditions.

For example, the higher top speed of heavy karts is valuable in tracks with gentle curves and in time-trials, while lightweights fare better when maneuverability and acceleration after crashes matter. We have also improved turn radius, making sure all karts within a class behave the same and none is harder to drive. 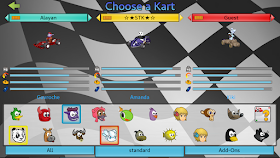 The second main change has been improvements and fixes to track themselves. A huge amount of unwanted shortcuts and skips (some of them exploiting rescue) has been patched. This ensures that online races won't see players abusing such issues to beat others driving along the intended path, except one which has been left for adventurous players to discover. 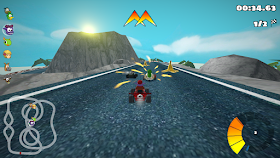 The third main change is a rework of slipstreaming. Slipstreaming is the speed bonus you get from being close behind another kart. In real life, the speed boost from being shielded from wind by another vehicle is small but continuous. In STK, it is cartoony : you are made aware of being in the boost zone by an animated air movement, and only activate the speed boost when you stop following the other kart after having been in the boost zone long enough.

In the upcoming release the air movement gets faster and its colour changes from white to yellow to make it easier to see when a boost has been charged. The slipstream boost has also been improved to provide a healthy max speed and acceleration boost, but more progressively and much less likely to cause the player to crash. The slipstream area where the boost can be collected is wider and longer. It is divided in an inner area and an outer area, if closer to the followed kart, less time is needed to accumulate the bonus. It is also much easier to collect boost in curves, so you can get the boost there too!

Finally, a deep rework of powerup probabilities has been done. While the set of available powerups is the same as 0.9.3, their distribution has been greatly improved in several regards.

Cakes and basketballs are now unavailable during the 15 first seconds of a race. Explosion duration, whether from weapons, bombs or track hazards, have also been shortened, in order to make them less punitive.

In the long term, we plan to introduce new powerups in STK to make gameplay more varied and to overcome some shortcomings of the current set, but these changes shipping in the next release are a huge step forward.

To close up this blog post, let's mention several smaller changes, mostly quality-of-life enhancements, some of them already mentioned in earlier blog posts :

We hope you will enjoy these changes!
Alayan at 2:40 AM 4 comments:
‹
›
Home
View web version