The community is waiting intently for SuperTuxKart version 0.7, but there's still much to do before the team will make a stable release. Fortunately, there will be an alpha release out quite soon (no exact date, but a week or two has been mentioned as an estimate). Do not expect the alpha release to be ready for regular players, as most content and some important features will not be there. The alpha release will be for artists who can help out with converting old karts and tracks to the new format with Blender, and perhaps start creating their own stuff with the new features included.

While we wait for the alpha version, it's time for some special effects! 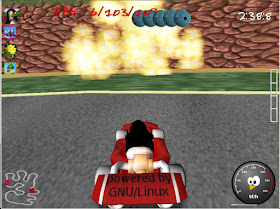 Just a quick demonstration of it against the wall. Pretty hefty explosion I'd say, so I'll be more careful next time I go bowling. 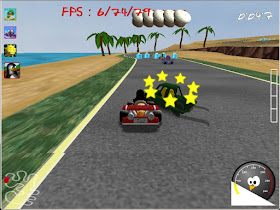 No, we're not talking about a pop star with a recent hit, but just an effect indicating when a kart was recently hit by an exploding weapon or banana item. One could say it's pretty useless, but it's eye candy; eat it! :P

Furthermore, time trial now works as usual. We also got a final lap message patch from Stephan Hillebrand; thanks.

The Irrlicht branch has been moved to trunk, so the current location is https://supertuxkart.svn.sourceforge.net/svnroot/supertuxkart/main/trunk. Please wait for the stable version of STK 0.7 if you do not intend to contribute. The team is not giving general support for the svn version.

There's been a lot of bugfixes and undercover changes recently as well thanks to the STK development team. Why don't you register yourself at the new forum and tell them how great of a job you think they do? And if you've got some contributions to make as well, it would be even better. ;)
Arthur at 10:33 PM 3 comments:

About time for another update, isn't it? I know many of you have eagerly awaited some news, but there simply hasn't been much to write about in the last weeks. Right now there's only two developers on the main game, and they could really use some help. If you want to help out, register yourself at the mailing-list(s) or get in touch in another way, though the list is the preferred place for development talk.

On to the news. 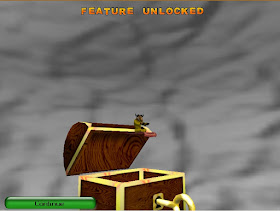 At the top you can see a brand new font, in style with the new STK logos, and on the bottom button the font has also been improved. Much better. Now the animated box also contains something, in this case the Gnu "kart". 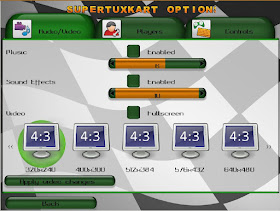 There are more new icons than just the tab icons in this screenshot, but they are spread across several screens, and you'll see them later anyway. Just wanted to give you a little feeling of what they look like. There are still font issues, but they're probably not top priority right now.

In other news, a few more turning animations made by Rudy85 and exported by xapantu have been included. And a binary for STK 0.6.2a for Solaris-SPARC has been made by Ten Little Indyans. You can find it at the SuperTuxKart download page, as usual.

The forum admins at FreeGameDev, where our subforums is located, has decided to use different forum software and leave the old forum read-only. The old posts were unfortunately unrecoverable. The old forum is still in use, but expect this to change soon. If you want, you can register at the new forum, though there aren't many users there yet. (Please note, that http://freegamedev.net and http://www.freegamedev.net are not the same. Stick to one of them if you want auto-login to work as expected.)

Whew! I hope I didn't forget anything. If I did, leave a comment, and I'll include it in the next update if it concerns the main game.

Note: As the "STK w/Irrlicht" branch is still in a very unstable state, the general public is recommended to use the latest stable version (0.6.2a) of SuperTuxKart.
Arthur at 10:00 PM 7 comments:
‹
›
Home
View web version