Surfing the wave of recent activity, I got to share some of the great news with you all. First off, I want to show you the new 'Old Mine' track. There are so many changes that it doesn't resemble much of the previous version, with the exception of environment. 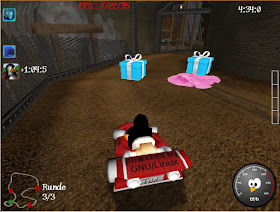 This track, made by Varivar, includes a few animations as well, but I won't spoil it all for you. ;)
Another track, 'Snow Mountain' was converted by sj04736, with a few smaller changes, including animating the balloon. To all track converters: look at this wiki page and be sure to update it if you're working on converting/improving a track in the main package. Replicating work should be avoided. Also, the forums is a good place to gather information and ask questions.

Furthermore, we got ourselves a couple new fonts and a couple less (removed old ones), and new translations. 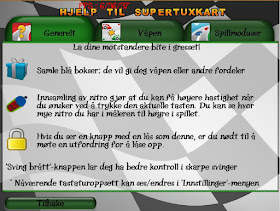 Don't bother trying to read this, unless you're Norwegian or speak another similar language. ;)
The font had quite a few characters missing, so they were added afterwards, and hopefully they look okay for the ones using them (none of them in the screenshot). We also added another font which supports Russian, Greek and Simplified Chinese. If needed, more fonts can be added.

Regarding translations: we got all the mentioned languages covered (some is work-in-progress) already except for Greek. Feel free to ask any question you might have, about translating, track making/converting, or anything else at the forums. We look forward to further contributions and activity. :)

With the fresh release of SuperTuxKart 0.7 alpha 1, and several people wanting a comparison with the current stable version (0.6.2a), I had no choice but just do that. :)
I'm using 0.6.2 without the 'a' at the end, since I'm not running in an environment affected by the bug in 0.6.2 that made the 0.6.2a release necessary. 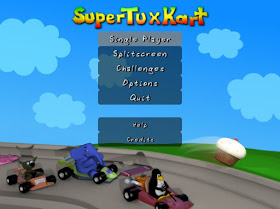 Multiplayer game modes (7):
Splitscreen with 2-4 players; same modes as in Single Player, with the addition of 3 Strikes Battle under Single Race. 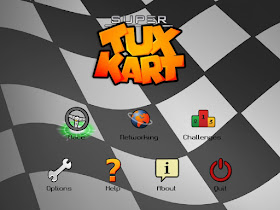 Tracks (3): On the Beach, Around the Lighthouse (updated), Amazonian Journey.

The above is of course subject to change, but this is basically what you get when you download the alpha version. Not quite exact though, as you get heaps of other improvements in the alpha. I will list a few of them here (sorry if I forgot something important):
Now, that wasn't so bad after all, was it? Regarding content isn't the alpha version appealing, but regarding possibilities is it a real beauty! That is why the alpha version isn't recommended for people wanting to have a fun time playing (well, besides the bugs and features missing); the content will come if we, the players, helps creating it! The old tracks also needs to get exported to the new format, and the STK team would really like some help in that regard as well. And while you're at it with opening the track in Blender - why don't you see if you can improve it a teeny bit? Let's make the 0.7 version of SuperTuxKart rock!

SuperTuxKart 0.7 alpha 1 is out

After some long work porting SuperTuxKart to a new graphics engine, irrLicht, as a replacement for the old and outdated plib, we are proud to announce the first alpha release of the SuperTuxKart 0.7 development branch.

Important
This version of SuperTuxKart is an Alpha release, and as such is not stable nor complete, and is meant solely for artists to port tracks over to the new format. This binary can be used by the curious to take a look at where STK is headed, but is not meant to be used to play.

Before reporting any bug, make sure to check the list of known TODOs at the following wiki page : [1]

For more information, take a look at the forum thread

SuperTuxKart 0.7 alpha soon to be released

I'm using a slightly over-used citation now: "Good news everyone!", but it fits just too well!
SuperTuxKart 0.7 alpha will soon be released. We have no date, as always, but it should be really close; just a few days away hopefully.

Now, for the disclaimers and "terms of use". ;)
First off, the alpha version will be nowhere near completion. There is still much missing, and you should expect lots of "rough edges", so to speak. The release is meant for artists so they can be able to convert their and other's tracks into the new .b3d format, and start making use of the new features available for track designers; take a look at these two articles for details:
New drivelines and Track exporter.

But, you might not be an artist and you still want to try the new version. Go ahead; we won't stop you. Furthermore, you can help out with translating SuperTuxKart; we're happy for every language we can get.

Unfortunately, there are no support for 32-bit length characters used in many Asian languages. This is being worked on, but the alpha version will not include this feature.
The regular font includes many special characters used in other languages, but the orange header font does not have many of those, as it's a custom created font. Please use this forum thread for special character requests; they will be added gradually when Auria get the time for it.

If you want to give bug reports, you'll have to do it using the bug tracker. And before reporting any bug, check that it's not listed already in the bug tracker or in the ToDo. The alpha version will probably have quite some bugs, but many are known already and posting duplicates will just give the devs more to answer and less time focusing on getting them fixed. Also, please include as much details as possibly needed (OS, if it's reproducible etc).

Now, the alpha is not released yet, but I'm writing this as a preparation.
As you see I've skipped the usual "STK w/Irrlicht:" in the post title, since the STK w/ Irrlicht branch has been moved to trunk. There will be no possibility for confusions from now on.
So, what has happened in trunk lately?

Not much to look at, as translation and other matters are in focus at the time. But, one significant change has been made. We've got a changed version of 'The Lighthouse' track.

New version of 'The Lighthouse' 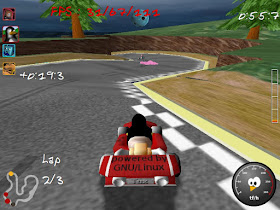 Exciting, isn't it? Many thanks to Stephen Dunn.
You'll also notice that the speedometer is now displayed properly, and while it's been in the SVN version for quite some time, I want to thank Yekcim for the new speedometer icon.

Well, I could probably go on and on about SuperTuxKart, but you'll soon see what I mean anyway. And remember; if you can help with anything - code, 2D art, 3D art, SFX, music, translating - don't hesitate, just do it! ;)
Arthur at 1:14 AM No comments:
‹
›
Home
View web version