So, after the usual excuses for not updating the blog, I get on to the actual news (me being late is not news), which makes some of this rather old news, but since you may not have heard it, I'll take the chance.
More tracks have been converted to be 0.7-compatible, one of them Snow Tux Peak, thanks to Varivar. It has been somewhat updated as well, with a cool sound effect when driving on the bridges somewhat before the finish line, which showcases a new feature for track designers: terrain spesific SFX. Also, XR591 is now compatible (not sure who I should credit), with a couple animations in as well. On a related note, the Hexley kart has been converted, and more kart animations have been added. 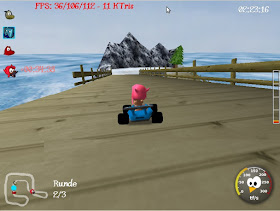 I should really turn on "Sync to VBlank" when I take screenshots to avoid these jagged texture-update edges. Will try to remember it for next time.
There are now intro, last lap and outro music jingles in the game, created by Dundersylt. Thanks!
A new track ending camera is now for testing in The Lighthouse track, where the camera no longer just follows the kart, but is at a fixed position from a distance and changes angle and position continuosly to follow the kart. Pretty neat! 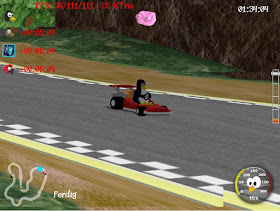 Furthermore, another gameplay detail has been added. The first two karts to press the accelerate button after "Ready, Set, Go!" will get a little boost as a reward. Fear not; the computer controlled karts have been tuned in order to make this feasible for us mere humans as well. ;)
Throw in a good amount of code cleanup and bugfixes, and we should hopefully, according to the Grand Master Joerg, be a little closer to a beta/RC release. Expect that to take some weeks, though.
I'll try to bring more news in not too long, in particular about the addon manager the always awesome xapantu has had in the works for some time, and also a new race result screen the aforementioned GMJ is doing. So prepare yourself to be awe-struck. ;D
Arthur at 3:29 PM 11 comments:
‹
›
Home
View web version