[Insert clever and witty intro which lasts longer than it would have taken you to finish 99 laps in 'The Beach' track with 'mr. Iceblock']
Now that's out of the way, and we can concentrate on the changes since last time. ;) 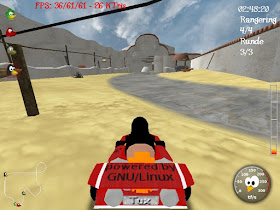 Interesting things are happening in the track department. Old 'Beach' has been thrown out in favour of a new track: 'Hacienda' by Jean-Manuel Clemencon (samuncle). Big thanks for making such a good track. :D

SuperTuxKart: it's all the rage 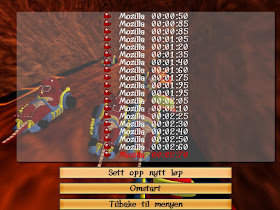 Fort Magma has been converted and has undergone some changes in the tunnel part - it should be much less of an eye sore, but it's harder to drive through without getting very badly disfigured (okay, not that bad). Hot lava is hot!

Oliver's Math Class has been converted by rudy85; thanks to you for that as well.
Secret Garden got some subtle, but important changes as well, including a larger bridge with added fence, and a widening of the track to make it easier to drive (still hard enough to be fun, don't you worry). These changes are courtesy of no other than conso, which we have dearly missed for many months now - welcome back! :D

The Island has been widened quite a lot, which means it is now a much easier track (I'm keeping the old one - narrow means battling for rank). Some other less significant changes has been made as well.
Some cosmetic changes for Shifting Sands also sneaked through the back door.

Regarding gameplay, times are a'changing here as well.
The bonus item handling has been changed so if you for example have a cake and then pick a bowling ball, you'll end up with the bowling ball and not keep the cake. Whereas if you have a cake and pick up a new one, you will of course get an extra as before. You can also get more than one item in a box now if you're lucky. That means you can pick one box, get 3 cakes, and get rid of three opponents at once! (Right now, this last feature doesn't work properly, but a patch should soon be underway.) The behaviour of these features can be changed in the configuration file if someone wants to play around.

'Follow the Leader' mode has now a formula which picks time interval between each elimination based on how many karts you choose, so if you choose e.g. 15 karts the first elimination will happen later than if you choose 5. Also configurable in the config file. Please help test to find good values if you are in the mood for it. :)

Adjustment of speed settings and reintroduction of terrain slowdown have caused some unwanted gameplay effects; whereas some are fixed the rest will hopefully be fixed soon. Help with tuning the values is welcome.
Race interface has been changed a little to use less space, which is important for splitscreen racing, but also to reduce clutter. No radical changes, but they help. :)

We have got several new kart animations by rudy85 too; thanks a heap for helping with this.
And now for the sad news.
'mr. Iceblock' has been booted from the game (by utilization of a winter shoe). Actually, we drove him into the lava in Fort Magma, just to be sure. Don't cry; there are more ice blocks in the sea.

The STK categories at freegamedev.net, have at time of writing 200 topics and 2300 posts combined. Yay for round numbers, and if you haven't contributed to those numbers, we would be glad to see you over there. ;)

I'll just finish off this post by saying that I know what you will say: tl;dr
Arthur at 3:20 PM 8 comments:
‹
›
Home
View web version