Confidence in the contents

My usual belated blog post is here, and since so much has been happening since 0.7, I'll just have to summarize a bit and possibly spread the news over a couple of posts instead of just throw them all in this one. But I'm pretty confident you'll be happy with the contents. :)

First we'll cover the big news: 'City' is back, better than ever before, 'Fort Magma ' has been totally remade, and oh! Did I mention they look gorgeous? 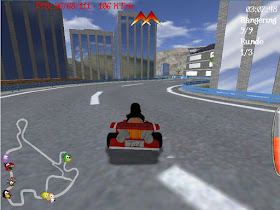 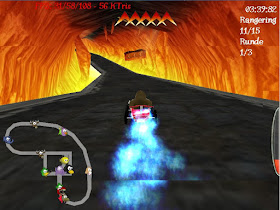 Woah, slow down a bit! What's all this? New nitro bar and zipper icon? And more spicy looking nitro? And what's that kart in 'Fort Magma'? Is it new?
To all of that I have to answer: yes, yes and yes! The kart is called 'Beagle', and it's a brand new one made by wolterh.
Now you might want to ask where the kart rank display, speedometer and action messages went. They went the way of the dodo. Or, to put it more elegantly: in an effort to minimize UI clutter and better the racing experience, these elements were removed. As of now, it's still not the default look, but it is quite likely to become so in the near future. We would love some feedback on this, as it's always risky to remove stuff people are accustomed to, and this might very well become at least somewhat configurable. But we will listen to any praise/criticism and try to balance this well for the upcoming 0.7.1 release.

So, is there any more graphical goodness to come in 0.7.1? Well, take a look: 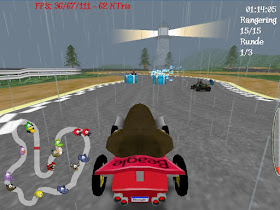 And if you're afraid that your computer can't handle the extra load, you will find a new slider in the graphics options that'll hopefully make STK still run perfectly well. You can now even have kart animations only for the human players, thus removing the overhead of animating all the AI karts in sight.

Separate entry for multiplayer in the menu 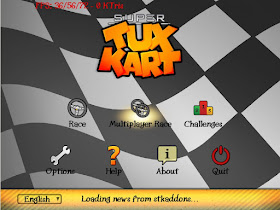 That's right; after having numerous people asking for help in regards to setting up multiplayer, Auria went back to the drawing board and put forward a more clear and easy comprehensible solution. And maybe this menu entry could be used for more in the future? ;)

You may have noticed the new bottom 'panel'. As of now, you can change language in-game at runtime. Pretty handy, especially when taking screenshots. ;)
Also, the loading notice has a connection to the new feature of installing addons in-game. While hiker has been working quite a lot with this, and certainly deserves more than a few lines, I'll keep it short and simple for this time and cover it more later. The thing is; we need your help.

We are looking for a server side programmer capable of PHP, generic web design and compilation of STK (we'll provide help with this if needed). The game side of things is mostly in place, but the server side will need a bit of work, so if you have the aforementioned qualities we would really like to hear from you. You'll have to cooperate either through the mailing list (preferred), and/or IRC. Installing addons in-game might be delayed until 0.7.2 or later, depending on how quickly we can get someone with the necessary skills and time to help.

That's it for this time - there have been more changes, but I'll try to fit them in another post instead of making this one a mile long. Take care, and let us hear from you regarding the latest changes - using the forums is a great way to do it as we can keep the discussions organized.
Arthur at 11:35 PM 17 comments:
‹
›
Home
View web version