Good and easily understandable weapons for STK has always been hard to come up with. Some of them have been revised over the years, and we've gotten a few new and original ones as well, mainly the plunger and the item swap weapon which are quite unique to SuperTuxKart if I am not mistaken. With the change from 0.6 to 0.7, a lot of the core of the game was rewritten, and thus there were fewer major gameplay changes. Now that's mostly out of the way, including major bugs (right?), so more focus can be shifted towards refining the game and adding more elements to it.

Recently, we've gotten two new weapons to play with in the game. The first one I've touched upon in an earlier blogpost, but now that funto has more or less finalized it, it's time for a screenshot. 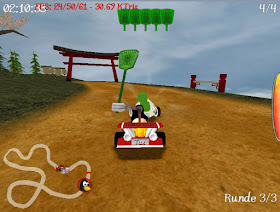 Earlier I said that it would swat incoming weapons as well as other karts. This is no longer the case, since defending as well as attacking would make it too powerful. So for now it's mostly an offensive weapon, with the added benefit that it will remove any parachutes or bombs on your back. It's a very nice weapon, so thank funto for that. :)

We're also getting a rubber ball weapon from hiker, which will eventually replace the anchor weapon. The rubber ball bounces along the track, aiming for the leading kart, with the added nasty of squashing karts along the way, which will slow them down temporarily. Hopefully it should be easier to understand than an anchor popping up from nowhere, as the rubber ball will bounce more rapidly as it's reaching its goal. We could use some nice sound effects, both for this weapon and the swatter, so contributions are welcome. ;) The appearance of the ball might still change, so I'm not posting a screenshot of it this time.

Speaking of sound effects, qubodup has started a "STK Sound Liberation" project, which aims to replace dubiously licensed sound effects with DFSG-compatible samples. Also, there are other sound effects that could be improved, though as far as software freedom goes, the dubious ones should ideally be replaced quickest. But SFX quality should be mostly up to par or better than the current effects, since we don't want to sacrifice quality unless it's really necessary. Anyone wishing to join this good effort can head over to these forum threads: STK Sound Effect (SFX) Liberation and Unhappy with Sound Effects?

Flames and motion blur when using a zipper. Doesn't that sound awesome? Well, we've got it now!

That Blur game can go home and cry ;P 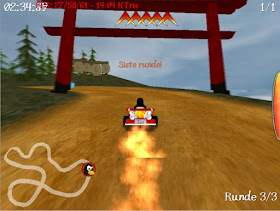 Apologies for the frame refresh spoiling the screenshot a bit, but you get the general idea. The motion blur is the work of funto, and the flame effect is by Auria. Combined the effect is really nice, and adds an extra sense of speed while you're zipping merrily along the track. 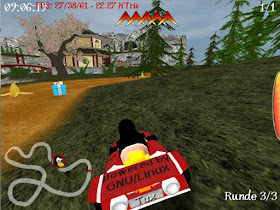 It will most likely replace Secret Garden for the upcoming 0.7.3 release. The old garden will be put in addons, readily available to expand the track selection if you so wish.

That wraps up this blogpost, and I'm getting myself outta here™ before I get hurt by the masses running to the site like real, dedicated fans. ;)