We are pleased to announce the first pre-release version of the upcoming 0.8 release, namely SuperTuxKart 0.8 alpha. 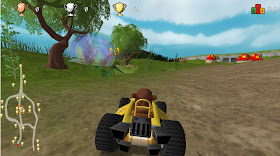 This is not the final version of 0.8 and thus contains more bugs, unfinished translations and is meant for testing and feedback. If you want a stable and polished SuperTuxKart experience, please download 0.7.3 from our website.
If you have installed SuperTuxKart previously, you will lose your previous highscores and challenge progress. Do not install this version in the same folder as any previous installations, and do not install a previous version in the same folder as this version.
When reporting bugs, please check if it has already been reported and remember to add the necessary details to your report (whether you can reproduce it, under what circumstances you can reproduce it, operating system and hardware details, whether you were sober or not, and so on and so forth).

Besides general feedback we are especially interested in the following areas:

We expect 0.8 to be final in 1 to 3 months, depending on how much bugfixing/tweaking is necessary. Meanwhile, you can help with testing (especially, feedback is welcome on challenges at all difficulty levels) and help complete translations. For feedback and discussion, please use our forum or mailing list (comments on the blog may be read but not necessarily answered).

What would a cartoon game be without a villain? Not much! But fortunately we have Tux's nemesis, the evil Nolok, and the next version will feature an epic race against Nolok. He won't release the poor Gnu that easily, of course : you will need to make him do so. And as any respectable bad guy, he gets his own powers. See for yourself :

Avoiding taking a hit of that hammer on the head will save you some headaches for sure! And Nolok is too evil to use pink bubblegums, really : he prefers spiky green slime, it would seem.

On other topics there has been work on improving the intro and end cutscenes, with many sound effects and now even some voice acting! The synchronisation of animations has also been improved. Don't worry though, the story is short and can be skipped.

More work has gone on skidding. It is now easier to control than before. For people that have tried SVN versions or nightly builds, an important source of frustration is that the AI is now almost impossible to beat. Indeed there have been many improvements : not only does it skid quite well, it also now tries to avoid bananas and bubblegums, and collects gift boxes. Do not worry, while we are making the AI good first, the next step after that will be the tweaking to make it not so frustrating to fight against :)

The overworld where story mode takes place and the challenge set have both been worked on and are starting to provide a complete set of challenges for story mode (including back Grand Prix challenges).


Thanks to OzoneOne for providing the music for the overworld and the work-in-progress BlackHill Mansion track that will replace Crescent Crossing, and also thanks to Bollen, another musician, who has work in progress songs for a few tracks.

Meanwhile Samuncle has been continuing his work on the new XR591, as well as a better castle for Nolok in Fort Magma 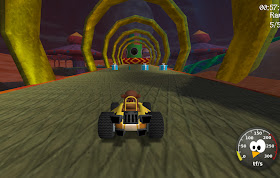 So, the next question is, when the 0.8 release? We are not quite ready yet, however we still hope to provide betas late October or (probably more likely) early- to mid-November.
Auria at 3:06 AM 15 comments:
‹
›
Home
View web version