Awakening with a jolt; landing on a cushion

Zzz... *snort* *huff* oh, there you are! Sorry for the long hibernation in blog posts, but I became a bit too used to having GSoC students writing all of them. Bad excuse, and I will try to get back to a more regular schedule, so this post will try to catch up to what's happened the last couple months.

To begin with it's probably best to answer the question of when the next release is coming. 0.9 is still quite far off, so we decided to try making a 0.8.2 release as soon as possible, hopefully a beta/release candidate within the year. So you should have something to download in December; whether the final release will happen then or January is still left to circumstance (bugs, first and foremost). We still have about 100 open issues to either solve or postpone, so there's (more than) enough to do for everybody, and if you would like to try your hand at helping us we welcome you, especially if you have some programming or 3D modelling experience.

There have been many improvements to the new 3D engine we're using (less and less based on Irrlicht, and more and more custom), and while an image speaks a thousand words, a thousand images in the form of a video ought to be a whole essay. The following video is an engine demo made by our resident artist samuncle.


You can watch the video at http://youtu.be/9iklMiy_Y9U and download the "kart" here.

Our artist samuncle has been hard at work indeed; check out the improved versions of Adiumy, Sara and Xue, in the tracks Cocoa Temple and Gran Paradiso Island.

Here's Sara on her snowmobile, showing off the extra pizazz the nitro effect has gotten recently, lighting up the new version of the STK Enterprise station. I wouldn't want to be right behind those thrusters; who knows what kind of strange radiation they're giving off! Apart from awesomeness. ;)

Oh, now we know. Thanks, Sara!

In miscellaneous changes, there's been way too many to list them all, but I'll mention a few very quickly.
The main configuration files now have their own sub-folder, so this means that in the future you can have several STK versions running simultaneously without getting issues where one version of the game overwrites another's configuration.
Some performance improvements have been made; for example we discovered a certain OpenAL call were slowing things down so we have minimized its usage and also moved sound to its own thread.
Physics has been improved again, specifically in landing after jumps. Now the karts are being cushioned from impact so there should be less issues with the chassis hitting the road, and karts adhere better to the road. (Maybe something for the ESA team?)
The following image is of the new screen for when you start STK 0.8.2 for the first time. You can now log in immediately to our stkaddons server which will enable you to vote on addons, see whether friends are online and view their achievements. Obviously the use of this feature will be expanded later when we have online multiplayer support and other things finalized. 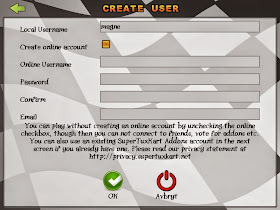 Note that we collect anonymous statistics from your client if you choose to log in, such as what version of the game you are running, which OS you are using and graphics capabilities of your hardware. Your privacy is important to us, and we don't collect personally identifiable information (actually, we don't want it either). The code is open for all to see, and if you absolutely don't want to share info to us you can toggle it off in the options. However, the statistics could help us to see which platforms with what graphics capabilities are most used, and when problems arise we have some way to quantify how many might be affected. Also it gives us a feel of where we might be able to aim to when it comes to graphics performance vs fancy effects, though we will still try to make that customizable. On a final note, if you don't trust us on some level, I'd advise you to not install anything from us either... just sayin'. ;)

Hope you all are having fun with 0.8.1, and look forward to 0.8.2 which is going to be a quite major minor release... yes, 'tis confusing but ignorance can be bliss, and a stitch in time saves nine, and don't take any wooden nickels, and... later folks, some men in white coats are here to talk with me.

Since an image is worth a thousand words, here's a quick Halloween picture made by samuncle : This picture was rendered by the SuperTuxKart engine, so you can see how much progress has been done on the graphical engine side.

To all those curious to learn about when next version will be released : we expect a beta in the following weeks or months. There is still some work left, however, especially in porting tracks, so if any experienced modellers want to help we would be most grateful!
Auria at 12:38 AM 7 comments:
‹
›
Home
View web version